We’ve been aboard Blue Sky since ~7:30 pm on Friday night. 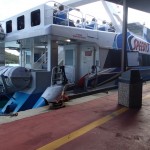 The ferry and customs entry to BVI took much longer than anticipated.  We are now on island time … slow and steady.  That’s the way it is.  We walked over to the grocery store in the dark on Friday evening to buy a few essentials for dinner and breakfast.  Ate and immediately fell into bed.

Day 2 – Saturday was yet another day of island time. We finally dragged ourselves to the grocery store around 10:30 to provision for the week.  Grabbed a taxi back to the boat and prepared to leave.  Meanwhile we had the BVI Yacht maintenance crew install a new refrigerator (the old one leaked water and had been causing problems for cruisers for the entire season).  The BVI Yacht club was grateful for the approval to proceed with a new one and I must say it works great.

We proceeded to go to the office to get our official instructions about the islands and the rules of the road (sea).  It was well after 2pm when we finally set out to destination #1.  Norman Island.  We had a good sail, reaching 8.8 knots at one point.  The boat is a comfortable one, that allows us to cook while underway.  No real heeling over.  The roominess is difficult to describe after 5 years of sailing on a 38’ Catalina (monohull), which I thought was plenty big. But this will be home, so the added space and storage room will be welcome. 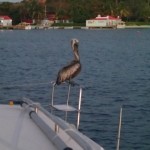 irst night on Norman Island we were on a mooring buoy very near Willy T’s (aka very popular floating bar).  We arrived at 5pm in time for the happy hour start up.  While we were not willing to board and join the excitement, we were well within hearing range of it, happy to be in our own space.  When we went to bed, it was surprisingly quiet below.  We were exhausted still after the travel to get here.  Norman Island is known for its pelicans.  We saw plenty of them.  Just like sea gulls back home, they are seeking free handouts from any cruiser willing.

Day 3 –  we sailed back towards Tortolla to a place called Scrub Island.  We attached to a mooring buoy between the island and a reef.  Today was our first swim off the back.  The water is cool but inviting.  The breeze never stops here so sailing again was fantastic.  I enjoyed a sit on the bow through large wave action.  Little bit of a joy ride. 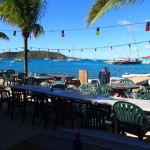 ay 4  – we sailed to Virgin Gorda Island.  We had another perfectly lovely sail, the winds in the Caribbean are very consistent 12-15 knots.  This was our first day at anchor.  It took two tries to finally take hold.  I’ve become the person in charge of the anchor, while P steers the boat to set it.  Here we went ashore and tested out the dinghy and enjoyed our first Caribbean happy hour at a bar with the sandy beach as its floor. A Rum Punch for me and a Painkiller for P at $3 each.  Very nice. 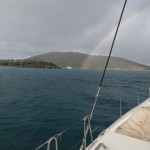 Day 5 & 6 – we took a longer mainly downwind sail to Jost Van Dyke island where a rainbow pointed the way to our anchorage where we spent two nights at anchor.  Winds were higher today, but Blue Sky performed as expected keeping us comfortable.  Sailing a multi-hull is definitely more comfortable when compared to a mono-hull. 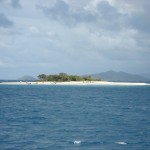 This island has many small islands near it.  The most popular being a small spit (Sandy Spit) consisting mainly of sand. You can walk around it in about 5 minutes. The water is clear and blue with lots of wave action to play or body surf in.  We visited it on day 6, but forgot to throw in the dinghy anchor, so one of us had to stay with the dinghy while the other explored. 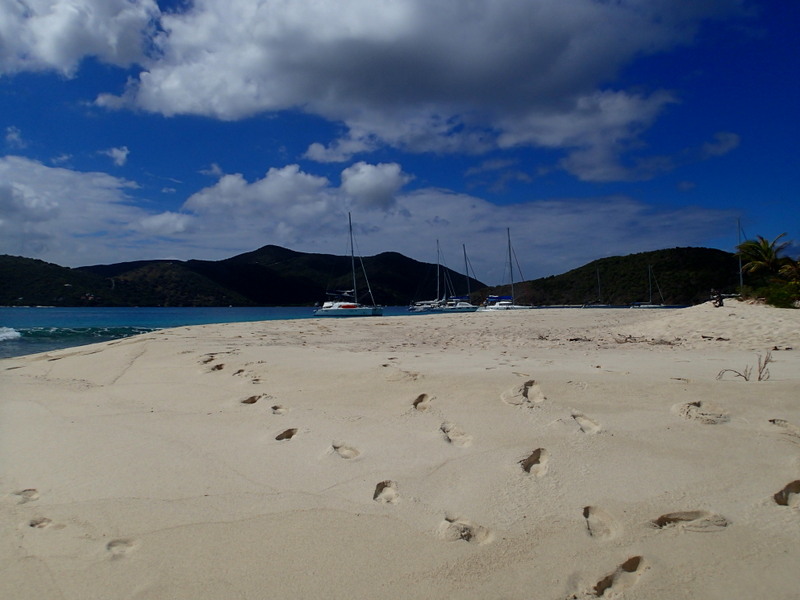 We headed to another sandy beach with an old boat wreck on it where we met a cruising couple from the UK who’ve been on the water for over 5 years now.  Their boat is Sheila (noted as a reminder for us to watch for her when we return). We may run into them agan.

Today we snorkeled also.  We swam from where Blue Sky was anchored about 100 yards to the nearest shore, snorkled and swam back.  We followed the snorkling with a final happy hour on shore at a small beach bar.  Here we enjoyed a platter of hummus and pita, some of the best ever.  We opted for glasses of wine over the rum or beer since this would be our last night on board.

Day 7 – returned Blue Sky to BVI Yacht Charters by noon.  We headed out from Jost Van Dyke at 7am.  An early start for us.  Winds were low so we motored the 3 hours around Tortolla island.  Had a successful docking at the fuel dock and packed up for our travels home.  We caught our taxi to the ferry and left at 2:30 for St Thomas where we spent the night and caught our flight out the next morning at 10am.

All in all the trip was fantastic, but obviously too short for two people who take a few days to wind down enough to really take everything in. We look forward to heading back.